Graduating from the University of Chichester 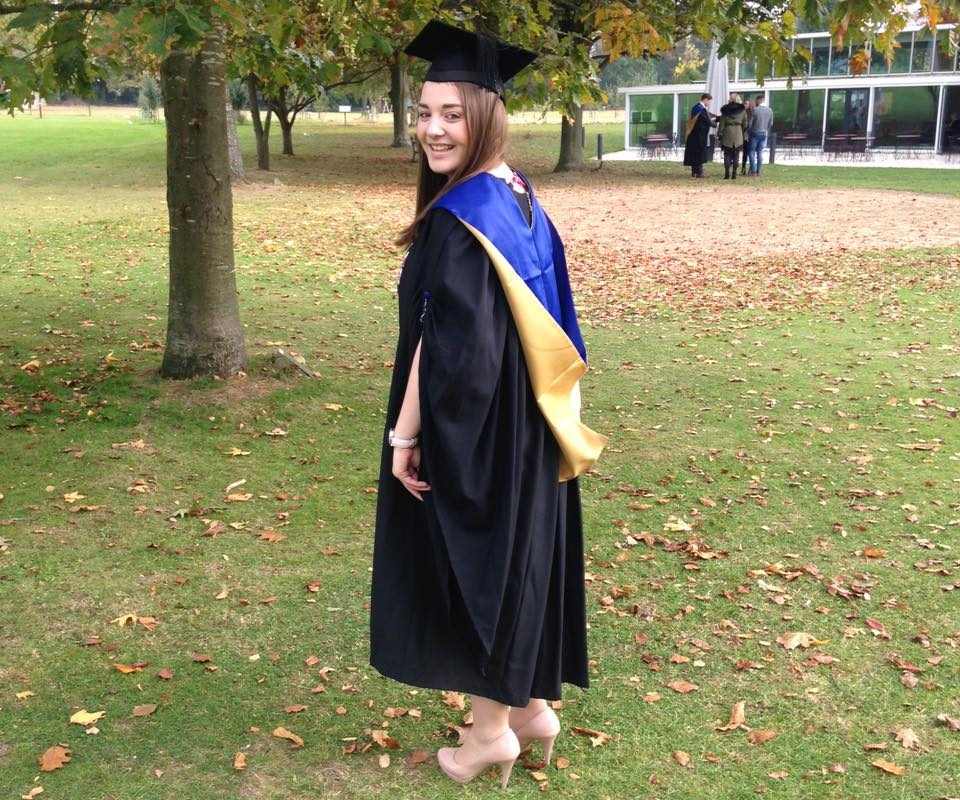 I can’t believe this time last week was my Graduation where I finally became a Graduate.

I’ve been meaning to write this post for a while, but I’ve somehow not been able to get over the whole day that even last week I seem to remember mentioning how I felt I was still recovering because it was a day that, if I’m honest, I was dreading. But it turned out to be the most wonderful day.

Now the reason why I say I was dreading it is that I wasn’t all that looking forward to graduating. I felt graduating was just a big excuse to spend a ridiculous amount of money on a gown, a hat, a graduation outfit, tickets and all that comes with graduation. I felt it was just a day where I would walk on stage, shake someone’s hand and receive my degree that cost £27,000 to get.

The whole week leading up to it, my family were all over celebrating it, whereas me I just didn’t see the big deal over it.

I feel I’m not the only one that felt this way.

But after an amazing weekend celebrating with my family in Chichester, I was starting to get excited over the fact I was graduating.

Once I woke up on Monday morning, I was eager to get myself looking graduation ready by doing my makeup precisely, making sure there wasn’t a kink in my hair by straightening it ever so much and ensuring I didn’t pull a ladder in my tights.

I ended up being a frantic, nervous mess.

We arrived at the Chichester Festival Theatre a little too early than anticipated, and my nerves started to kick in. A day which I wasn’t bothered about at all, suddenly I’m thinking about all these things: what if I trip over on stage? What if I pull a ladder in my tights mid-graduation, what if no one wants to talk to me? After all, we’ve been apart since May and everyone has moved on with their lives.

We arrived where we met my grandparents who drove all the way from Kent, and we finally had a moments peace sitting down in the Chichester Festival Theatre cafe for a pre-graduation cup of tea. Two sugars added in mine to calm me down.

I remember looking around to see if I recognized anyone. Everyone seemed like such a stranger. I felt like it’d been years since we all saw one another because we are not all the same people we were when we left.

Some of us have jobs, some of us have new lives in London, some are working as actors and everyone has their new lives meaning University is nothing more than a distant memory.

However, I saw my old-roommate and friend Beth in the distance, and I instantly felt excited. Someone that has actually made the effort with me all Summer is here!

My first reaction was to run (or trot over in heels) to her and we greeted each other with the biggest hug. Oh, how great it was to see her! I felt so happy to see someone I’ve missed so much.

So the day was commencing where we all formed a line to register and collect our guest tickets. I started recognizing people now, as it was the Music, Film and Media departments graduation so it was all the people I have worked with during my University studies.

Once registered, we made our way around the corner to collect our gowns and hats when we stumbled across a cool little area…

The Chichester Alumni department had set up a cool Alumni section filled with blue balloons, sparkly lights, pictures of previous graduations and a  big canvas with Class of 2016 #ChiAlumni where we could write our names on it and pose for a picture. They were also giving out Chi Alumni coffee cups, which obviously, I loved! I think we ended up bringing about 6 of them home!

I then managed to see old course mates, including my wonderful friend John who I miss so much and we already said we’re arranging a weekend in London now he lives there.

He’s another friend that has made the effort with me, and I hope he feels the same from me. I feel I haven’t left University with a huge amount of friends that I’ll stay in touch with forever, but the few of them I have made, although little, will be the ones I always make an effort with.

I remember laughing so much that day, just with course mates where we’d remember stories of our days, we’d catch up with what’s been happening the last few months and all worry together about falling off the stage!

The time was near: Graduation! We entered the Chichester Festival Theatre auditorium where we were greeted by Ben Hall, the head of Music, playing his organ where obviously, being Musical Theatre students we clapped along and cheered him at the end. There was plenty of selfies being taken, scouting for our families in the audience and lots of singing.

I was finally going to be making my Chichester Festival Theatre stage debut, but not for the reason of performing. It was Graduation time!

I worked with Clive Behagg with Student Union stuff when I volunteered as an officer for two years in a row, and he’s an awesome guy who’s an inspiration and he didn’t hold back on this day. He gave an incredibly inspirational speech, saying to go out there and achieve great things, to not hold back and that we would always be welcomed back.

The event was far less formal than I anticipated. Obviously, it was a big occasion which was organised efficiently and with a brilliant speech delivered by Clive Behagg, but overall it was so much fun and we all had permission to raise the roof with cheers for our fellow course mates, and our families had full permission to make a noise and to not be so English about it.

This was great because Graduation ceremonies can be so formal (or what I’ve heard anyways) so Chichester did us proud by giving us a day to remember.

Film and Media students were first to graduate, then when Musical Theatre was announced, we all gave the biggest cheer ever! Obviously.

I felt like a proud mum watching my fellow course mates graduating. Where we would magically transform from undergraduate to graduate in a blink of a handshake!

We all made it pretty loud and clear we were supporting each other by giving the biggest cheers, and obviously being Musical Theatre students, people made epic entrances and exits.

Finally, it was approaching my turn. How’s my hair? Is my robe on correctly? Will my hat fall off? Oh god, please don’t be the first person to trip up on stage!

You’ll be pleased to know that I walked on that stage with grace (and a little bit of excitement) and I didn’t fall! I even celebrated as I was walking down by waving my hands in the air like I just didn’t care. But I DID IT! I couldn’t believe I made it out University alive, let alone off stage alive!

I was full of emotion and just utter shock that little old me had actually graduated.

After the ceremony, me and my fellow Musical Theatre course mates all met for a big group photo by the goal posts, and yes, we did the traditional hat throw! It was amazing, more amazing than I thought it would be.

I was full of celebration and love for my fellow course mates around me, because we’ve all had our own personal challenges during the last three years, but we all made it through together.

My parents got all emotional, bless them! It’s rare my mum cries at anything, so to see her crying was so sweet. My dad, however, wasn’t a shock as he cries all the time.

I couldn’t have got through University without them. They’ve supported me, they’ve helped me, they’ve financed me, they’ve travelled for so many hours at a time just to be with me for the day when I need them most and they’ve been the best parents I could have asked for. I’m nothing without them.

It was so lovely for my grandparents to be there too, as I’m the first of their grandchildren that they’ve witnessed graduating.

My Grandad is one of the most special people in my life, so it meant a lot for him to see me graduate. I loved that he cheered from the audience Well done, Nicole during my graduation.

I’ve got lots of friends to thank to. Friends who I had to leave behind during my University studies, but friends who stuck by me and supported me too. We were all so incredibly busy with our own lives, but there were always there when I needed them.

Shout out to Chris and Robbie, two friends who actually drove all the way from Northamptonshire to Worthing to see my final production, driving 8 hours in total. You guys are the best!

Kaz, who has probably been my number 1 fan throughout all this. She’s boosted me when I’ve needed it most and it’s much appreciated. I have so many other friends to thank, but I think that would take ages. But they’re all my weird, supportive, happy bunch of friends who I have such a tight friendship with. You all know who you are.

Wow, I’m getting all emotional again writing this.

University was a rocky experience. I had my downs from losing friendships, being rejected for roles I auditioned for, breaking up with a long-term boyfriend, and when I found out about my hearing impairment during University.

But then I’ve had some amazing times from being part of some awesome Musical Theatre productions, discovering my passion for Theatre Producing, successfully campaigning and winning two student elections, meeting friends and having some exceptionally great drunk nights out. There are too many good times that outweigh the bad stuff.

Thank you to the University of Chichester, for the most incredible three years.

You made it fun!

I even made a YouTube vlog on my Graduation which you can check out here if you’d like to see the day in video. 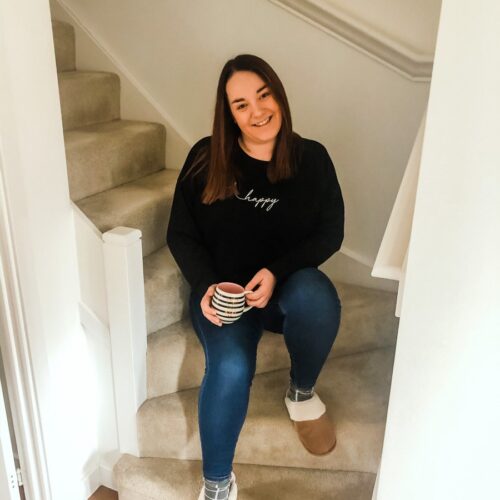 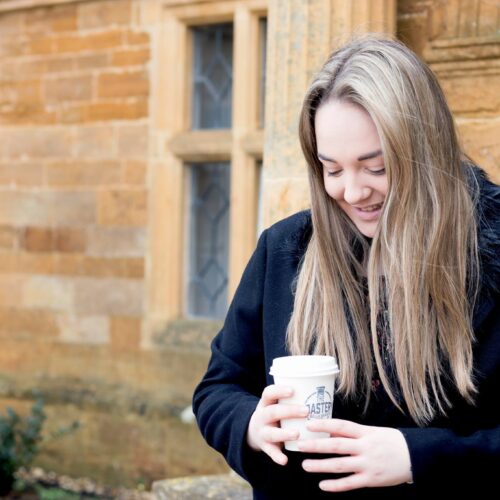 Felt cute, might delete later (despite the fact my

HAPPY FRIDAY! ⁣ ⁣ The weather might feel a bit

All Monday mornings need to start with a coffee fi

Sign up for exclusive news, content, a monthly what's on guide, foodie inspiration and small biz interviews in Northamptonshire!

Any cookies that may not be particularly necessary for the website to function and is used specifically to collect user personal data via analytics, ads, other embedded contents are termed as non-necessary cookies. It is mandatory to procure user consent prior to running these cookies on your website.